The excitement over the 28th Annual Kenlake Hot August Blues Festival continues to grow as the lineup of artists is announced. Without a doubt, it's the best lineup the festival has had in many years, with nationwide blues acts appearing for the first time, and some festival favorites returning after several years!

Advance tickets on sale AT A DISCOUNT PRICE now online at kenlakeblues.com. Advance tickets cover both Friday and Saturday and are only $25 between now and July 1st, compared to $40 at the gate at the festival. AFTER JULY 1ST THE PRICE WILL GO UP! 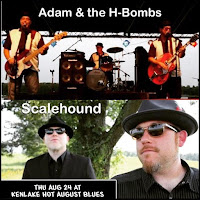 The Thursday night lineup will be on the lawn of Kenlake State Park Lodge. The best part of the Thursday evening show is that it is FREE!!

It starts out at 6 PM with Scale Hound. This group has local roots but has played some big time shows including Bonnaroo several times and playing in shows along with groups like the Driveby Truckers. They will be followed by local favorites Adam and the H-Bombs!

Friday the festival moves over to the amphitheater the gates will open at 3 PM because we want everybody to have a chance to get there early and select their seat. The music starts at 6 PM with Rip Lee Pryor, the son of the legendary Snooky Pryor. The apple did not fall far from the tree! Rip Lee has played all over the world but especially in South America. 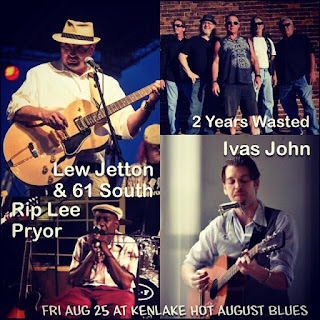 Next up is 2 Years Wasted. If you love the Allman Brothers you will love 2 Years Wasted as they combine the sounds of electric blues and jazz into a truly unique sound.

Ivas John hails from Missouri, but is a familiar artist across the nation, especially since his music has spent so much time on the Roots Music Report Charts over the last few years. He appears regularly in St. Louis and Chicago where his unique playing style and voice has become well-known.

Finishing out the night is Lew Jetton and 61 South, returning to the festival after a five-year absence. The band is coming off a fantastic 2016, where their latest release spent more than six months on the Roots Music Report's Contemporary Blues Charts, and received worldwide airplay. Lew hints there's a good chance we'll see them joined onstage with some “friends” for a rockin' blues jam to end the night.

On Saturday, the gates open at 10 AM, with the music beginning at noon. There's plenty of time to come in and get settled and have a delicious lunch from one of the local vendors! Kicking off the music is Street Corner Blue, out of Chicago, A veteran Windy City outfit complete with horns.

Next up is Reggie May, a New York native known for his songwriting and distinctive singing. 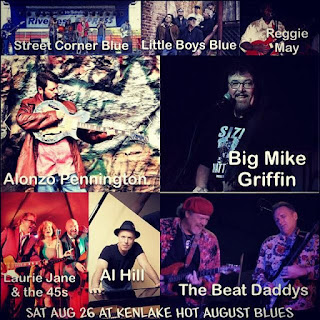 Vizztone Records recording artists Little Boys Blue follows with a distinctive sound they perfected while recording their latest CD, Tennississippi at the world renowned Fame Recording Studio in Muscle Shoals. Tennissippi spent much of last year on the charts, including the Roots Music Report, and the Living Blues Radio Charts.

Al Hill became known to many this past February when he was named the winner of the Blues Foundation's International Blues Challenge in the solo/duo category, but others have known about the longtime Detroit player's talents for many years as bandleader for the legendary Bettye LaVette!

Kentuckiana's Laurie Jane and the 45s burst upon the national blues scene earlier this year, after wowing audiences on Beale Street in Memphis with their hot, swinging style and 12-string slide guitar.

The Beat Daddys developed their loyal, nationwide following the hard way, with years of touring along with a roster spot on the prestigious Malacco Record label. They continue writing and recording some of the best electric blues to this day!

Big Mike Griffin is "Mr Hot August Blues." He appeared at the very first festival in 1990 and continued every year all the way up until 2008. This year he is marking his return, which is music to the ears of his many loyal fans in this region. During his hiatus from Kenlake, the 6'10" Bluesman was been inducted into the Oklahoma Blues Hall of Fame. You'll see Big Mike on several of the murals at Kenlake State Park including in the amphitheater. This year you will also see him on stage again!

Like his father, Eddie Pennington, Alonzo Pennington has been named world champion at the world thumb picking championships, but he's also established his blues credentials beginning with a critically acclaimed CD recorded in the capital of southern swamp soul, Mussel Shoals! Since then, he's continued to amaze audiences on the festival circuit. Pennington is a guitar slinger of the highest caliber. One of the few, other guitar players make it a point to go see!

Posted by Lew Jetton at 7:12 AM No comments:

Chicago based STREET CORNER BLUE has been performing traditional Chicago Blues and R&B for decades. Exploring the roots from Bourbon Street to Beale Street, Motown to Muscle Shoals, this ensemble delights in exploring each divergent thread and weaving it into the unique sound that is Street Corner Blue. Each individual a gifted veteran performer, the collective sound positively brims with excitement and grooves in a way that only years of shared experience can produce.


The Street Corner Blue repertoire is culled from the rich variety that is the R&B heritage. Some of the material is familiar. Some is more obscure. Everything is presented with craft and care with each performance demonstrating the band’s easy command of the R&B language, a respect for the material that leaves room for twists and surprise, and most of all, a sense of adventure and just plain fun.


Street Corner Blue has been a reliable hit at Festivals, Clubs, and Events for years, with wide audience appeal, danceable sets, and a full out horn band presentation, which keeps bringing the fans back year after year.
Posted by Lew Jetton at 1:10 PM No comments:

Hailing from Jackson, Tennessee, this six piece unit, Little Boys Blue, may be a new name to blues fans, but its bandleader and some band members have quite impressive pedigrees. Singer/harp player Jimmy D. Taylor started the band with guitarist Steve Patterson twenty years ago. Comprised of veteran players who had logged many sessions with Nashville country and Sun Records rockabilly artists, the band mixed up those styles with Delta blues and rock n’ roll. They often backed Carl Perkins and were a regional festival favorite.

In 1997, they won third place at the Blues Foundation’s International Blues Competition. In 2002, Taylor backed big name Nashville artists like John Rich, Gretchen Wilson, Hank Williams Jr. and Blake Shelton. Five years later, Taylor returned to Jackson and concentrated on the blues, forming the current band that includes among others, his son, Alex Taylor on guitar. For their latest album, Tennissippi, the band draws on some guests too, including the two piece Alabama Horns. This is their fourth album, their largest label, and has the distinction of being mostly recorded at FAME in Muscle Shoals, AL. (Elmore Magazine)